How NOT to design for multiple screens: Pulse iPhone App Usability issues

Pulse is a news reader that aggregates feeds from various sources using RSS and presents them in a good looking interface. I’ve been using RSS Readers for a while and at a first glance Pulse seemed like a great leg up from the existing apps like Reeder or Byline, it feels like you’re using a proper app with all the goodies of immersive experience instead of a web browser wrapped in an app. Steve Jobs showed off the iPad version of the app in his keynote and there have been lots and lots and lots of rave reviews about the app so I won’t go into those details but focus on the pricking points instead.

The key differentiator is the problem

This is a classic example of how not to design for multiple devices. This interface was designed for iPad and it worked great there, but the problem started when the exact same UI was scaled down for the iPhone. Now when you start off it’s all hunky dory, but when the novelty wears off and reality sets in, you realize that it’s not that usable. Here’s a comparison between BBC, which has a layout similar to Pulse.

Now I understand the need to stand out and be unique, but that can’t come at cost of basic usability. As described above, this layout works for BBC because it has control over it’s content but won’t work for someone who sources their content from independent feeds and has no control over their content.

If Pulse wants to build a mass base, they need to address the usability issues which can become a problem in the long run.

I suggest that Pulse team considers something on the lines of TIME layout which suits their content type better. 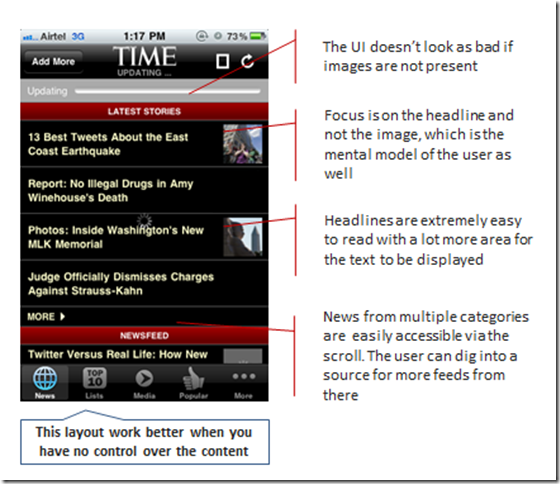 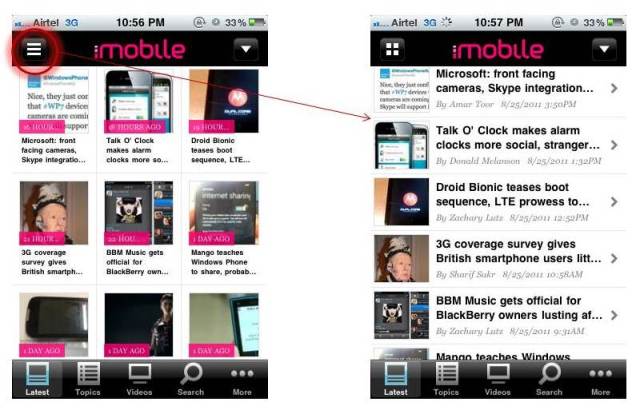 User can switch the layout from Grid view to List view

9 Responses to How NOT to design for multiple screens: Pulse iPhone App Usability issues